But today I turn to my side of the family: September 1st marks the 55th anniversary of my parents’ wedding, and this is my favorite group photo from the album. Dad and the groomsmen are, sad to say, all deceased, and all are still so missed. Mom and her bridesmaids are all still happy and healthy. And the flower girl still has a smile to charm your heart. 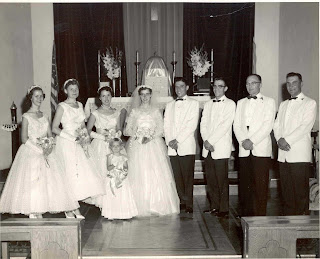 The three groomsmen are two of my dad’s five brothers: best man Vincent (Dad’s identical twin), brother-in-law Bill (husband of Dad’s sister), and brother Joe. Bill was a little bit of a controversial choice for a Catholic wedding, as he and my aunt were divorced from their first spouses and were each other’s second spouse. Devout a Catholic as my dad was, he could recognize when a rule or convention should be ignored. Uncle Bill was always a beloved member of the family, and to this day I love to see him as a part of my parents’ wedding.

The three bridesmaids were two of my mom’s three sisters, Rita and Martha, and (in the middle) her friend Marcia. Marcia had been one of mom’s roommates when she lived and worked in town, had known my dad for some time, and set my parents up on a blind date. Marcia was a convert to Catholicism, and if I remember correctly, my mom was her sponsor. Marcia and Mom are still dear friends; I last saw Marcia and her husband at my sister’s wedding 10 years ago.

The flower girl was my dad’s niece Jan. The youngest (with his twin) of eight children, my dad had a number of nieces and nephews by the time he married.

Mom’s dress was a near-white ice blue, and about 20 years later she recycled her veil to be my youngest sister’s first communion veil. Her string of pearls was my dad’s wedding gift to her, something that her daughters have been sure to mention to prospective husbands when our turn came to marry!  I have always liked that rosaries were a part of the bridesmaids’ nosegays, as prayer was always an integral part of my parents’ marriage and family life.

The wedding was very early in the day, at 9:00 or 9:30 I think. After a reception, the party continued out at the farm (my mother’s parents’ home) until late in the evening.

Looking at this photo of my parents on their wedding day has always given me joy, and now a little bittersweet feeling too. Those strong young men are all gone. My parents were looking with hope into a future that ended up bringing some challenges and sorrow as well as all the joys of raising a family. My parents’ marriage produced six children, twelve grandchildren, and (so far) five great-grandchildren. The “hope” and “joy” parts of their marriage continue in the lives of their descendants.
Posted by Julie Michutka at 10:03 PM

Email ThisBlogThis!Share to TwitterShare to FacebookShare to Pinterest
Labels: Michutka